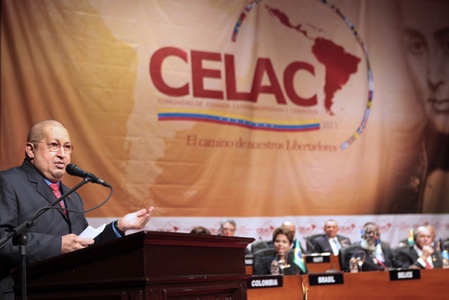 This weekend, the Community of Latin American and Caribbean States (CELAC), an organization exclusive of Canada and the United States, concluded its foundational summit meeting in Caracas, with interesting speeches by a host of chiefs of state.

Latin America has grown to one tenth of the global economy and population and sits on a substantial share of the world’s primary natural resources.  As a result of the price cycle of raw materials, the expansion in Asia (and Africa), the crisis in the North, and (partly) their policies, the economies in the region have been growing at a decent pace.  This meeting is a preliminary yet significant step in their process of economic and political integration.  The initiative comes — without a doubt — from the left in Latin America and the Caribbean, particularly from the governments of Cuba, Venezuela, Bolivia, and Ecuador.  It also seems clear that Argentina, Brazil and above all Mexico, Chile, and Colombia — a list that includes the three largest economies in Latin America — are being dragged along.  (To be fair, the governments of Argentina and Brazil are involved, but it is doubtful that the economic powers in these two countries are well aligned behind them.)  This process is viewed by Latin Americans and Caribbeans as a continuation of their struggles for independence (historically ushered by the victorious slave revolution in Haiti in 1791), against European colonialism, and more recently against U.S. imperialism.

I should digress at this point to say that the term imperialism is not typically used in Western economics and other social sciences nowadays, except in mocking ways.  However, in its widest sense, the term is particularly adroit to refer to the international status quo.  It is properly descriptive of the ongoing economic, political, and military abuse that small and economically vulnerable countries suffer at the hands of the economically-rich and militarily-powerful nations, most prominently the U.S., the UK, France, and Germany.  The fact of this abuse — with deep roots in world history — can be easily documented in its manifold  forms, even if its specific nature is subject to ongoing controversy among social thinkers.

Meanwhile, the European Union (EU) is in a rout that makes its dissolution a concrete possibility, as its leading nations (Germany and France) demonstrate an utter incapacity to assist their partners in distress — a distress which is, by the way, caused by the very (skewed) economic architecture of the European economy (hint: it is capitalist).  The countries of the EU have 6 percent of the global population, produce about twenty six percent of the world’s product, own a substantial stock of accumulated global wealth (physical and human) — in no meager part the fruit of their colonial and imperialist exploits.  Geography, the principle of economies of scale, the formation of competing regional blocks, and — to some extent — history would make it appear as if the project of European economic and political integration were a slam dunk.  But, as it has been traditionally conducted — under the aegis of the large capitals of Germany and France — this process of integration has been half-baked, politically superficial, and laden with contradictions.  The economic and political myopia that the European leaders have exhibited and continue to exhibit is staggering.  The European right, led by Angela Merkel and Nicolas Sarkozy, either by action or omission, seem bent in leading the disintegration of the EU.

It is up to the European people to decide whether, as a result of the vices inherent to its formation, the EU deserves to die.  But, at some point, the European left will have to spearhead an effort to rebuild a truly united Europe — except that, this time around, from the grassroots, articulated around the interest of the European working people.  (Here’s a step in the right direction: http://bit.ly/uHe1lI).  Similar tasks are ahead of us in the United States and Canada.  The Occupy movement is offering us an opportunity to jump start the construction of new and functional economies and polities that put people first, all in the face of the evident failure of the existing social structures.

This requires further elaboration, but — for now and for the record — I wanted to hastily call attention to the effort in Latin America and the Caribbean to upgrade their level of economic and political cooperation, at a time when the North is grappling with crisis and confusion, but also (let us not forget) the hopeful harbinger of the struggles to come: the Occupy movement.

UPDATE: I just read this in the New York Times, and makes my point like nothing else.  Note the symbolism — the chiefs of state of the two “leading” (yeah, right!) EU nations caucused unilaterally (okay, bilaterally) on reforming the EU treaty, and are then calling the affected ones to come around: “Here it is, take it or leave it!”  The gist is — “You profligate ones, tighten your belts: Austerity, austerity, austerity.”  I just cannot imagine Merkel or Sarkozy (or Obama, for that matter) sitting and listening to the speeches by each and every chief of state member of the EU on how they view their situation; say, as the presidents of Brazil, Argentina, and Mexico did with their peers in Caracas.  Merkel and Sarkozy didn’t even bother bring Monti and Zapatero (and Rajoy, the incoming prime minister in Spain) for the photo op.  Why bother when capital rules?

View all posts by Julio Huato